Having recently returned from two weeks soaking in amazing green countryside during our Irish Adventure, we decided to go urban for our first hike back in Maine, so we headed into Portland and the Eastern Promenade. While this trail is located in the city, there are still plenty of opportunities to interact with and enjoy nature on this path.

This is a well utilized trail and one I’ve hiked previously, but it had been a while so it was nice to see it again with new eyes. A lack of planning also known as not bringing our sunscreen, as well as other commitments later that day, meant we had to do a more abridged hike so we weren’t able to enjoy the full trail. We really need to pack a “go bag” with hiking supplies at the ready. We seem to end up unprepared a lot! Even though we didn’t do the entire trail, we did get enough of a taste to remember why it is so popular.

As we began the hike, we were immediately greeted by expansive views of the harbor which was dotted with boats. By coincidence, we were there during the MS Harborfest Regatta‘s Sunday festivities which included Lobster Boat Racing and a Tugboat Muster, so it’s no surprise that the harbor was crowded. While we arrived early enough to have no trouble parking, things steadily picked up throughout the morning and we started seeing more and more people camped out on folding chairs turned to the harbor, and watching the races.

The first part of the Eastern Promenade trail is flanked by the ocean on one side and the Maine Narrow Gauge Railroad tracks on the other. There is a wide, paved path defining the trail, but there is also a parallel dirt one carved out by the multitude of hikers who opted for that route previously. This winding dirt path has occasional off-shoots that end in especially lovely harbor views . 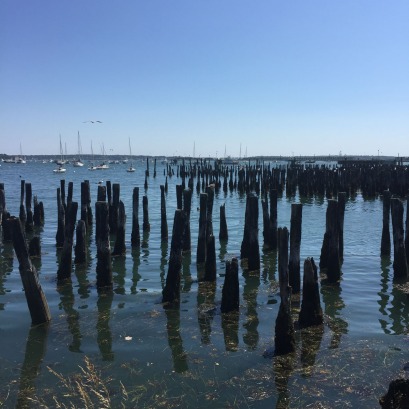 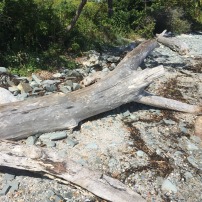 During our hike, we ventured down onto the rocky beach to get a little closer to the ocean. The grouping of large and small, uneven rocks was difficult to maneuver without careful focus but it made for a fun challenge. There was also a great breeze. The rocks abruptly end at a small, sandy beach area which we crossed before rejoining the main path again.

We also discovered Portland Paddle‘s East End Beach location, and where we’ll be heading to when we’re ready to try some sea kayaking. We did it for the first time in Dingle Bay while in Ireland and really loved kayaking so it’s definitely something we want to try again. From the stacks of kayaks, paddle boards, and canoes highlighting the location of Portland Paddle, we are not alone in our desire to glide through the ocean.

The Eastern Promenade trail continued on and then curved up and left as it followed along the fence surrounding the which adds a little space age feel to the area with its large white domes. There are even some small info plaques along the fence adding a touch of education to our hike. 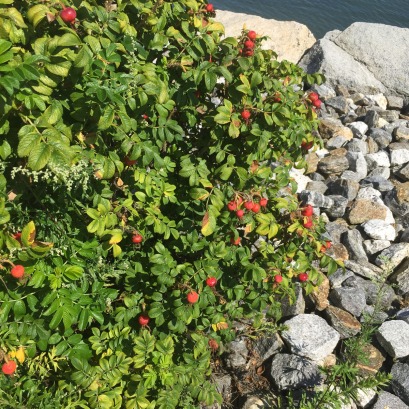 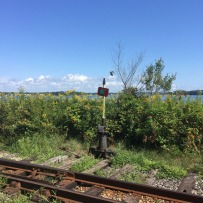 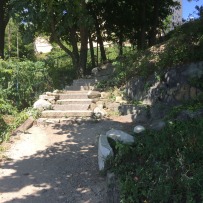 The trail is beautiful with its many stunning views of the bay. It’s dotted with rose hip covered bushes, and we crossed paths with many chirping birds along the way. It was an incredibly lovely walk.

Sadly, we ran out of time and had to turn back before reaching the end where the trail loops back around on it’s own although we were fairly close. You can also connect up with the Back Cove Trail to make it a longer walk which I’d like to do on our next visit. There wasn’t enough time on this trip, although on the hike back, we did take a brief detour up the stone steps leading to Fort Allen park. There were even more people enjoying the sunny weather and watching the races from the park’s higher vantage point. But, for us, it was only a quick stop before we had to head back to other life commitments.

We have landed in Islay. Let the whisky tasting begin.
Dinner at the Witchery on the Royal Mile during our brief stopover in Edinburgh before heading out to Islay.
All aboard the Hogwarts Express (aka the Jacobite Steam Train).
Scottish thistle spotted during our Quiraing Hike in Scotland. Love that it looks like the hike was a stroll through field. It was so much more than that. Stunning views everywhere.
Bow Fiddle Rock is a natural sea arch near Portknockie on the north-eastern coast of Scotland. We took a road trip! It was worth it!
Loved our hill walk to visit the Cairngorm Reindeer Herd. Amazing experience.
Enjoyed a little Scottish dessert- cranachan - after some bangers and mash at MUMS Great Comfort Food. We had never heard of it before but it was quite a tasty treat!
We’ve arrived in Scotland. Looking forward to exploring this amazing country.
Love this view of the waterfront.
As I finish packing for my next travel adventure, a little toast for #nationalwineday. Netherlands here we come!
Loading Comments...
%d bloggers like this: