We’ve had amazing summer weather but this past week took a turn and things got cloudy and cooled off. No complaints. You appreciate the sunshine more when there are the occasional bad weather days. Plus, those cooler nights make for great sleeping weather.

We had a friend coming up for a visit and, while originally planning to relax lakeside, had to rethink our agenda when the weather changed. We headed to 33 Elmwood in Westbrook for lunch and bocce. 33 Elmwood is an expansive place with food, drink and games. We walked in and were immediately greeted by the receptionist standing behind the front desk where you can also pick up bocce balls or bowling shoes.

We decided to eat lunch first so she showed us to a booth in the dining area which also overlooks the bocce courts. They have some local beer options on the menu so I went with a Gneiss Weiss. I ordered a grilled cheese for a little comfort food on a dreary day. The grilled cheese was heavy on the bread and light on the cheese. It was good but I tend to like the cheesier varieties. My friend got the nachos which I’d had before on one of my previous visits. They are served in a make your own style with the toppings heated and laid out in a cast iron dish surrounded by tortilla chips. They looked good. My other friend got the fish and chips. She said the fish was delicious.

After our relaxed meal, we headed to the bocce courts. It was $5.00 per person for one hour of bocce.

Here are 8 things I learned about bocce on our visit to 33 Elmwood: 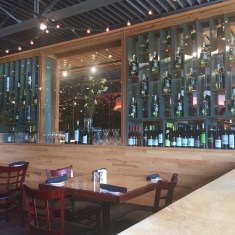 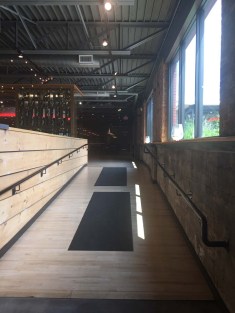 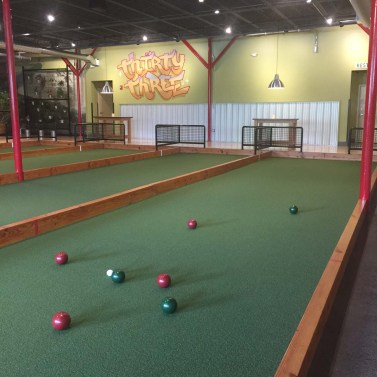 There are plenty of other activities to try at 33 Elmwood. As you enter, there are bowling alleys off to the right, and the bocce courts, which are on the left side, can also be used for corn-hole. They have shuffleboard advertised too.

There are definitely lots of choices but be sure to check out 33 Elmwood’s website for their hours. They are closed on Sunday and Monday although available for private events. And, other than Saturday, they only open in the evenings at least during the summer.

This was my third trip to 33 Elmwood. I’ve enjoyed dinner with friends, and stopped into the bar area for drinks on Cinco de Mayo.  I like the vibe at 33 Elmwood and it was fun do something active while having drinks. They have live music on Friday and Saturday nights too. I’ll be heading back again soon. I might need to check out their Thursday night corn-hole tournament.

10 thoughts on “Eight things I learned about bocce during lunch at 33 Elmwood in Westbrook.” 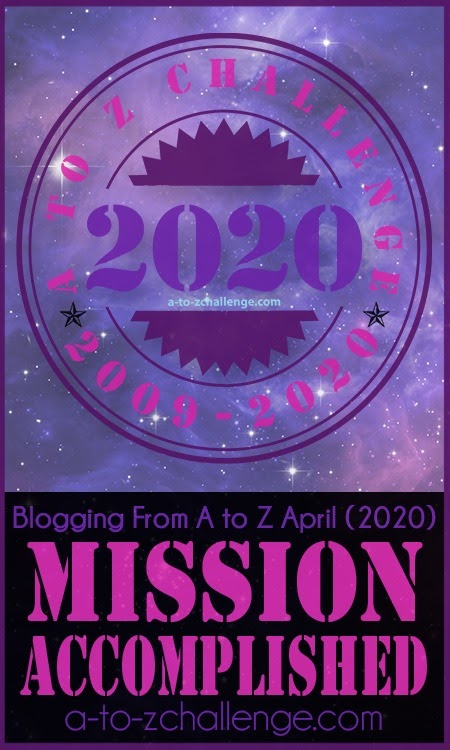 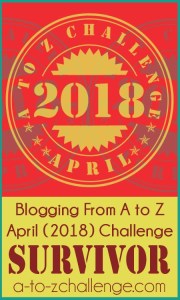 As I finish packing for my next travel adventure, a little toast for #nationalwineday. Netherlands here we come!
What a beautiful day yesterday. Took advantage and got my herbs repotted. Excited to see them grow.
Visiting New Orleans. Its been fifteen years since our last visit. Looking forward to exploring the city again.
Took a new picture of our cutie pie Neville for #NationalPetDay . Tried to take one of Rossi too but he had his annual vet visit today and he's still recovering aka in hiding.
Picked up this sweet heart pillow at the @erinflett sample sale last weekend and the cat immediately claimed ownership. Can’t really blame him.
Walked a section of the Mountain Division Trail by Gambo Field. It's a great trail especially in spring to avoid all that glorious mud that arrives this time of year in Maine. Neville approved!
So fun to be out at a live comedy show again this weekend.
This is the cat's chair. It's in our office and the cat spends most days sleeping there while I work. This is our dog, Neville. He doesn't think it's fair that the cat gets a chair and he keeps trying to claim it even though it's much too small for him. Every time he gets up on it, he seems confused as to what to do next. He won't accept that maybe he should just let the cat have his own chair.
Capping off a hike with a sour from @blazebrewingco
Neville gets so excited when we head out on a hike. This is him waiting impatiently in the back seat of the car as we get ready to hit the trails a few weeks back. #hiking #maine #dog #doglife #hikingdog #rescuedog #trails #mainelife
Loading Comments...
%d bloggers like this: