My favorite movie is It’s A Wonderful Life. I have a wall dedicated to memorabilia from the movie. Vintage pictures from magazines and behind the scenes photographs of Jimmy Stewart and Donna Reed hung together are a visual love letter to this Frank Capra classic.

While those pictures are on display all the time, I also have some decorations related to the movie that I only put out at Christmas. Each December, I relocate the pictures that line the top of the bookcase along the landing of my stair case and turn it into a miniature Bedford Falls. I put down a white fuzzy blanket and line up my Cape Craftsman village pieces along with a snow globe depicting the final scene from the movie. Porcelain ornaments hang from a garland that drapes down in front of the shelves full of more memories from my favorite movie. END_OF_DOCUMENT_TOKEN_TO_BE_REPLACED

OK, full disclosure, I am not sure if Anna Kendrick was “Made in Maine” but she did grow up here so I’m using that convenient bit of trivia and the fact that I just finished her book scrappy little nobody to include her in my A to Z challenge this year.

I knew scrappy little nobody would be funny. Anna pops up regularly on those “People you should be following on Twitter” lists because her posts are hysterical. I recommend you take a minute to follow her on Twitter if you are not one of the six million who already do: @AnnaKendrick47.

What I didn’t expect was how relatable it would be because other than both being “Made in Maine” there’s not too many places where our life experiences intersect. She started in theater young and was performing on Broadway by age twelve bouncing between New York and Maine ultimately graduating high school early and then moving to Los Angeles on her own at age seventeen. It was a good decision. Other than a little ramp up time she has been steadily working.

END_OF_DOCUMENT_TOKEN_TO_BE_REPLACED

When my oldest learned to read she became obsessed to the point where I would dread parent-teacher conferences because we knew we would be chastised with stories of her inappropriate reading. I am not sure reading can ever be truly inappropriate, but it impacted her attention in the classroom. If she had two minutes of free time, she read for thirty. It was a problem. Still, how lucky that she could so easily be transported into the world of books and so engrossed that everything around her disappeared.

Stories are important in my house. My youngest didn’t read as much as my oldest, but no one did. Instead, she was enthralled by the other side of stories. She became my writer. She is looking into creative writing programs at college now. It is an exciting time.

END_OF_DOCUMENT_TOKEN_TO_BE_REPLACED 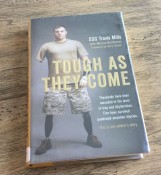 I had heard of SSG Travis Mills but knew little of his life experiences or details of his catastrophic injuries received while serving with the 82nd Airborne in Afghanistan. I was drawn to his story because I had read about the Maine based non-profit that he launched called The Travis Mills Foundation which is in the process of creating a retreat for combat injured veterans and their families.

I have not been directly touched by war. I have family members who have served including four generations of Navy sailors starting with my grandfather down to my nephew who is currently serving. I’ve heard the stories. How my grandfather was away for years during the war and how my mother didn’t recognize him when he came home. How his brother woke up one morning during his deployment to discover the men on either side of him dead, and he carried the memories of the war deep inside. How he hated M.A.S.H. because he couldn’t understand why anyone would laugh about war.

END_OF_DOCUMENT_TOKEN_TO_BE_REPLACED

As my A to Z Challenge theme is focused on Maine, I thought it would be fun to do a book review on a book that has a connection to Maine. Fortunately for me, Sarah Smiley released her latest book, “Got Here As Soon As I Could; Discovering The Way Life Should Be” on April 1st. It’s almost like she knew I would need something for the letter R in my A to Z Challenge. Isn’t it just like a fellow Mainer to do something so nice!

I have not read any of her previous books, but one of my good friends absolutely loved her earlier book “Dinner with the Smileys” so I figured I was in good hands. This latest book is a compilation of articles from her Syndicated Column.  Sarah moved to Maine from Florida about six years ago and she immediately bonded with the state. That’s something I can appreciate. While I didn’t relocate here, I have a great passion for my home state and enjoy how she tells stories that really highlight some of the wonderful things about Maine.

END_OF_DOCUMENT_TOKEN_TO_BE_REPLACED

As I finish packing for my next travel adventure, a little toast for #nationalwineday. Netherlands here we come!
What a beautiful day yesterday. Took advantage and got my herbs repotted. Excited to see them grow.
Visiting New Orleans. Its been fifteen years since our last visit. Looking forward to exploring the city again.
Took a new picture of our cutie pie Neville for #NationalPetDay . Tried to take one of Rossi too but he had his annual vet visit today and he's still recovering aka in hiding.
Picked up this sweet heart pillow at the @erinflett sample sale last weekend and the cat immediately claimed ownership. Can’t really blame him.
Walked a section of the Mountain Division Trail by Gambo Field. It's a great trail especially in spring to avoid all that glorious mud that arrives this time of year in Maine. Neville approved!
So fun to be out at a live comedy show again this weekend.
This is the cat's chair. It's in our office and the cat spends most days sleeping there while I work. This is our dog, Neville. He doesn't think it's fair that the cat gets a chair and he keeps trying to claim it even though it's much too small for him. Every time he gets up on it, he seems confused as to what to do next. He won't accept that maybe he should just let the cat have his own chair.
Capping off a hike with a sour from @blazebrewingco
Neville gets so excited when we head out on a hike. This is him waiting impatiently in the back seat of the car as we get ready to hit the trails a few weeks back. #hiking #maine #dog #doglife #hikingdog #rescuedog #trails #mainelife
Loading Comments...