Hanging out at the Fork Food Lab grand opening was a festive experience. We were not alone in our excitement at checking out this new shared kitchen space. We arrived a little after six pm and the party was in full swing, along with a decent size line waiting to enter but fortunately things were moving quickly.

The perimeter of the parking area in front of Fork Food Labs was lined with tables where Fork Food Lab members were passing out samples of their tasty food creations. There were pockets of people huddled around the tables waiting for their turn to try the samples, as well as other sporadic lines. It was a little hard to know exactly where to go at times but it all worked out.

There was a stage setup on the far right playing live music which added to the celebratory atmosphere. There were also a few food vendors in attendance for the grand opening including El Corazon Food Truck, The Highroller Lobster Co, and the Marshmallow Cart. After a spin around to check out the outside setup, we went inside Fork Food Lab to tour the newly opened space.

The basic premise of Fork Food Lab, as described on their website, is that food businesses can become either part-time or full-time members for a monthly fee. With membership they have access to the commercial kitchen facility and equipment. There is a tasting room onsite where members can get feedback on their creations.

Fork Food Lab has two floors. The first floor opens onto the Gelato Fiasco open kitchen. We splurged on a cup of their salted caramel gelato. Their gelato is always fantastic! I’m excited to have their tasting kitchen close by at Fork Food Lab, as well as to learn more about the gelato making classes they will be offering. The front area also had products from other Fork Food Lab members available for sale.

For the grand opening, the back area of the first floor was setup with a bar serving craft beer from Allagash and Baxter Brewing Company. The second floor was also open during the event. We took a spin around to check out the new space. It is lined with industrial prep areas and appliances, and definitely gave me kitchen envy. 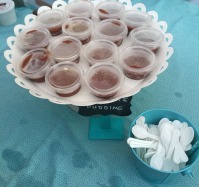 Here is a list of the vendors that we sampled during the Grand Opening. Sadly, we missed a few during this visit but it gives us a great reason to return again another day.

Bruno’s Italian Foods. I’ve been to their restaurant before and have always enjoyed their menu. It was nice to see them at the Fork Food Lab opening event, and we were more than happy to taste the delicious ravioli samples they had available. It was my daughter’s favorite, and we were thrilled to learn that they would be offering their pasta and sauces for retail sale.

Cape Whoopies.  With a tagline of “Maine’s Gourmet Whoopie Pies” who wouldn’t want to try a sample of some of their delicious whoopie pies? This tasty treat is a Maine staple, and Cape Whoopies makes some delicious ones. We enjoyed a bite sized sample and, while I went with a traditional one for my tasting, their website has some pretty awesome flavors listed that I think I might need to try next time.

The Whole Almond. I have been intrigued by Almond Milk for a while but had never actually tried it before now. I’m not sure why. The sample I was given was good and not at all what I was expecting. It wasn’t as rich as regular milk, but had a nice almond flavored kick at the end. Almond is probably one of my favorite flavors. I buy almond everything!  I was told that they use only water and almonds to make their milk. I come across a lot of recipes that call for almond milk and now I know where to go to get some delicious local, fresh almond milk .

Maine Flavor. They had a variety of foods to sample each of which was paired with a corresponding fruit sauce resulting in some tasty combinations including cheesecake with blackberry sauce, or prosciutto with blueberry sauce. Everything was delicious and beautifully presented.

White Cap Coffee. I’m not a coffee drinker, although I adore the smell of coffee, so unfortunately I skipped the White Cap Coffee samples. However, my daughter, who is more of a coffee fan, tried their pumpkin cold brew coffee and gave it two thumbs up.

Tortilleria Pachanga. We use a lot of tortillas in my house so I was so excited to find out about this local offering. Their tasting samples included a couple of quesadilla options served on their fresh corn tortillas including a version with seaweed in the tortilla. Yum. I love the idea of a healthier, local option being available.

Plucked Fresh Salsa. They have a few different salsa versions available including Purely, Mildly, and Sinfully Plucked. My daughter went with the mild one for our tasting and thought that it was delicious. My husband is a big salsa eater in our house, so we’ll have him trying these salsas soon.

Joyful Spirit. They were serving up their “sensible nutrition” (as their business card proclaims). They had samples of their tasty trail mix, and some granola bars. I tried some of the trail mix which was really good.

Have Chef  Will Travel.  This private catering company, offered a variety of options during the grand opening of Fork Food Lab including platters of cheese, fruit, crudities, and chicken skewers.

I am sorry if I missed any samples, or companies who are making Fork Food Lab their home. It was unintentional. I will be keeping an eye on this space and the food vendors that are making their mark out of it. I so enjoyed checking out all the offerings and learning more about this great venture.

This is an awesome new space for Portland. I love the opportunity it provides for smaller, and newer, vendors to gather and create their amazing food items and continue to expand the Portland food scene. I look forward to continuing to watch Fork Food Lab as they grow, and support their members.

5 thoughts on “Tasting our way through the Fork Food Lab grand opening.”

Leave a Reply to Weekends in Maine Cancel reply

As I finish packing for my next travel adventure, a little toast for #nationalwineday. Netherlands here we come!
What a beautiful day yesterday. Took advantage and got my herbs repotted. Excited to see them grow.
Visiting New Orleans. Its been fifteen years since our last visit. Looking forward to exploring the city again.
Took a new picture of our cutie pie Neville for #NationalPetDay . Tried to take one of Rossi too but he had his annual vet visit today and he's still recovering aka in hiding.
Picked up this sweet heart pillow at the @erinflett sample sale last weekend and the cat immediately claimed ownership. Can’t really blame him.
Walked a section of the Mountain Division Trail by Gambo Field. It's a great trail especially in spring to avoid all that glorious mud that arrives this time of year in Maine. Neville approved!
So fun to be out at a live comedy show again this weekend.
This is the cat's chair. It's in our office and the cat spends most days sleeping there while I work. This is our dog, Neville. He doesn't think it's fair that the cat gets a chair and he keeps trying to claim it even though it's much too small for him. Every time he gets up on it, he seems confused as to what to do next. He won't accept that maybe he should just let the cat have his own chair.
Capping off a hike with a sour from @blazebrewingco
Neville gets so excited when we head out on a hike. This is him waiting impatiently in the back seat of the car as we get ready to hit the trails a few weeks back. #hiking #maine #dog #doglife #hikingdog #rescuedog #trails #mainelife
Loading Comments...
%d bloggers like this: