I was appalled to learn that Maine did not make it onto the list of top ten states for ice cream consumption according to the Huffington Post article “Ice Cream Cities: Which Ones Eat the Most”. It confuses me because in the Old Port alone, there are four ice cream stores and two Gelato stores. In roughly a six block radius, you have six places to get frozen treats. That’s one every block!

Maybe I’m taking it too personally, because certainly I feel that I do my part to move us up in the standings. I usually go for ice cream, but was intrigued by the amazing flavors of Gelato that are carried by Gelato Fiasco. I did a little internet research on them and loved that they had strong Maine roots. I was also impressed with the fact that they use locally sourced milk. We decided to head up to their flagship store in Brunswick to check out some Gelato.

What, you ask, is Gelato? Maybe you didn’t ask, but I wasn’t really sure of the difference myself. So, here is a description of  Gelato from the Gelato Fiasco website:

“Gelato is a style of ice cream that dates back several centuries to Italy. Since the primary ingredient in good gelato is milk, not cream, it has a softer dairy profile that should allow flavors to come through more strongly than a traditional ice cream.”

The flavors all sounded fabulous so it was a little hard to narrow down our selections. At their store, you can try unlimited samples of their Gelato, but I always feel a little awkward doing more than one or two freebies. In the end, I only sampled the Maine Wild Blueberry Crisp which, while delicious, wasn’t quite the flavor I was looking for on this particular day. 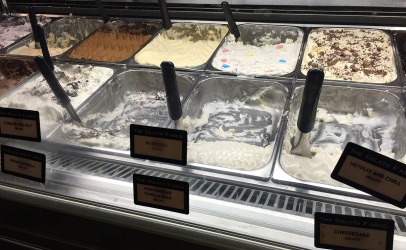 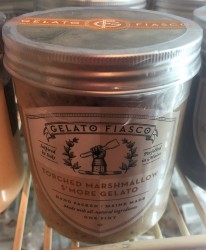 I ended up ordering a medium dish with two flavors. Below are my selections with the flavor descriptions from the Gelato Fiasco’s website:

Netflix and Chill “We opened The Notebook of flavor ideas and after searching for the longest time, settled on this Friday night delight: It features a stream of caramel buffered with a pillow of peanut butter cups and a blanket of brownie bites. If you’re lucky, you’ll find some kisses, too.” The name alone was too good to pass up. Apparently, it was their Valentine’s Day special.

Cookie Therapy “Crème-filled chocolate cookies folded into cold, frothy milk. This humble after-school snack is a classic for a reason. As we developed the recipe, we aimed for the ideal balance of creaminess, chocolate crispiness, and nostalgia. All generations agree: nothing goes better with Maine milk than all-natural chocolate cookies.” I’m a long-standing cookies and cream fan so this is my go-to flavor for most frozen treats.

My daughter also struggled a bit with her selection due to the abundance of amazing choices. After sampling the Moxie Sorbetto, she went with the classic Caramel Sea Salt. She added a waffle cone which is her favorite way to eat ice cream or, in this case, Gelato. They make their own waffle cones fresh from scratch each day so it was definitely worth the add-on.

My husband went for a medium dish and split between two flavors as well. Below are his selections with the flavor descriptions for the Gelato Fiasco’s website:

Maple Sap Tap “Buckets are saddled against maple trees across Maine every March, collecting precious sap to be boiled into syrup. This wonderful ingredient inspires Maple Sap Tap Gelato. We reflected on Maine’s maple heritage as we designed and refined the recipe for Maple Sap Tap Gelato in our shops during the winter of 2013. It’s a special sugarhouse delight made with rich Maine maple syrup and our house-made maple walnut toffee. The flavor earned high marks from customers in our stores, and it’s now offered in pints.”  My husband loves Maple Syrup and this flavor reminded me of our recent outing on Maine Maple Sunday.

Sicilian Pistachio “Our Fridays-only favorite. Never go in against a Sicilian when Pistachio is on the line!” Lucky for him, they had this flavor available on the Saturday that we were there. It had an amazing, rich pistachio flavor.

I love that you can pick as many flavors as you want for your order. While I was happy with the two I selected, at least I know if I’m having an indecisive day, I can pick them all. Although, I’m guessing once you get past four flavors in one dish, things might start blending together. You don’t want to have them blend. Each flavor is so rich and delicious. My husband’s pistachio was especially yummy.

The store was larger than I expected and, while busy the entire time that we were there, we were able to grab some comfy seats to enjoy our Gelato. I haven’t been to the Portland store yet, but I’m sure I’ll make it over at some point this summer. And, if I need a Gelato Fiasco fix before that time, their pints are also available in grocery stores throughout the country.

I’m participating in a Blogging A-Z Challenge for April 2016. I will be posting new content every day except Sundays. Each post is associated with a letter of the alphabet, starting with A and ending with Z. My theme for the challenge is Life in Maine, and each post will in some way relate to Maine. There are over 1500 other bloggers participating in the challenge. Click HERE to learn more.

32 thoughts on “#atozchallenge | G is for Gelato Fiasco”

Leave a Reply to Weekends in Maine Cancel reply