Pizza is one of those go to foods that often gets a bad rap or is dismissed as fast food. Probably because there are a lot of not so great pizza options out there. Fortunately, there are a lot of delicious, more creative choices available too. When some friends came up this past weekend, we decided to go to the Portland Pie Co.

While the Portland Pie Co. originated in Portland, they have expanded to seven restaurants throughout Maine and New Hampshire according to the location finder on their website. I counted up the pizza flags on the map which was more challenging than it sounds. For our Saturday night excursion, we headed to their Portland location on York Street.

Parking in the York Street area can be a little challenging but there is a business parking lot across the street that allows pay parking on evenings and weekends. The cost, at least when we were there, was $3.00 an hour.

Because of the way our logistics worked out, also known as poor planning, we had three cars. We parked a couple of the cars in the pay lot while the third driver found street parking albeit a bit of a hike from the restaurant so it’s a toss-up as to who the winner was in this equation.

We got there about 7:30 pm and only had to wait a few of minutes for them to get our table ready. They have a full menu with many non-pizza offerings too. A few people at the table ordered appetizers including the buffalo wings and spinach and bacon stuffed mushrooms. I was only an observer for these pre-meal snacks so other than saying they looked quite good and that there were no leftovers, I can’t really talk about how they tasted. 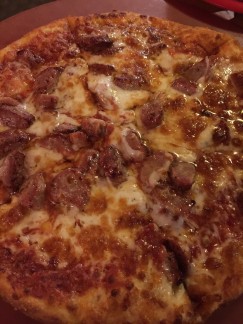 The pizza selections were fun with some unique sounding combinations. I was especially enamored with the Cresent Beach entry which was described on the menu as “Ketchup and mustard base, American cheese, fresh hamburger, onions, bacon, steak seasoning, all woven in our three cheese blend. Finished with romaine, sesame seeds and pickles.” It’s a burger on a pizza pie!

While I couldn’t take my eyes off the entry, the reality of the fact that I’m not that adventurous an eater actually kicked in and instead of choosing something from their “loaded” menu section, I headed instead to the build your own pizza area. I went with something safe (for me) and ordered a sausage and three cheese pizza. It was a good choice.

Portland Pie Co. is known for their dough selection which includes basil, wheat, garlic, and beer. They also had a gluten-free option available. I went with the beer crust and it was excellent.  A few of the people at our table ordered the basil crust and thoroughly enjoyed that as well.

The atmosphere was relaxed and casual. They did have a bar area although we sat on the restaurant side. It was a fun night out, with great friends and delicious, upscale pizza. What more could you want for a Saturday night in Portland? 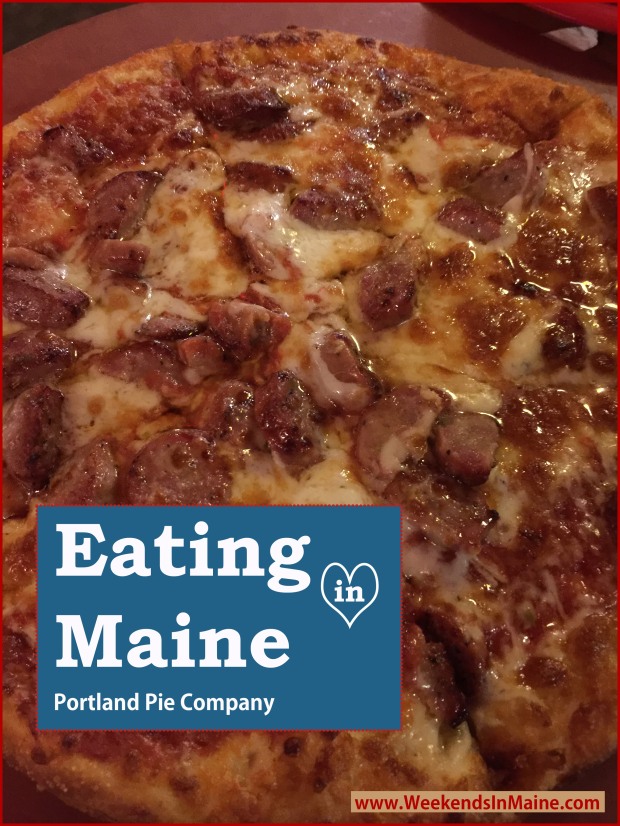 Finally some clear skies and warmer (or at least warm enough) weather. Time to just hang at the lake.
Friday night and he found his spot.
Always fascinated by the mushrooms we encounter along our walks.
Enjoying a little bbq from @wilsoncountybarbecue and of course some fries for #nationalfriesday
Today was a beautiful day for exploring Old Orchard Beach. Pier fries were on the menu of course.
After two days of pacing in the heat, this one finally took a nap.
This is Rossi’s “please turn down the heat” pose.
Our farm share flowers that we got last week displayed in the beautiful new @edgecombpotters vase that my husband gave me for Mother’s Day.
So I feel like a bit of a poser buying @giffordsmaine Full Quart Pretz since I don’t follow the Celtics but come on - it has caramel, pretzels and chocolate. I had to do it! Plus, it’s 95 degrees.
Dark clouds are hovering but so far still warm and beautiful.
Loading Comments...
%d bloggers like this: